skip to main | skip to sidebar

Why does the pouch always think about the Dick in the Box song when it sees menus with "steps"? Because that crass mofo's pouch is always in the gutter... Like everything it flushes down the toilet. Anyone remember Seven Hens? *crickets* Yeah, that's what I thought... Even though it had some form of fried chicken in their sandos, it was still amazingly awful... Kinda like the Nekid Cheekan Chalupa at Toxic Hell. No amount of PR coulda save that sinking schnitzel... They eventually closed up shop quietly into the night, leaving the empty space for another sucker with a loan and a dream.
We all know about the Korean street food/bbq scene for awhile now, it's spices and sauces have been making small appearances on almost every menu... Shit, if Applebee's and TGIF's are serving Corean BBQ and Tacos... You know that shit has jumped the shark, the Fonz and PSY. Why would any sucker be dumb enough to open a dedicated fast casual Korean street food joint? Wait, I don't think any answers are needed for that question... But somehow, someone made that dream come true with Bull Gogi up in rural Norcross. It's near my office, that's why I know about it. Never went because I want to get the fuck outta Peachtree Corners as fucking quick as I can after dark... It is like Gatlin, Nebraska, you will never get out! But anyways, so, they opened up another location in Decatur... I don't know if it's the same family running it but the menu is downsized big time from the Norcross one. The new Decatur joint is bulgogi and poke bowls only... I really wished they had the KFC here but the menu is so super simple that there's no way they can fuck it up, right?
Alright, let's just get it over with... Jesus, the pouch's facehole talks as much shit as his asshole does.
Ok, long story short since this menu is short as fuck... I didn't hated it, but instead, I ated it. I know, right? Who is this motherfucker writing this? Did someone hijack the cheekan lipz? Someone put an APB out for a confused walking muffin top, STAT.
I'm not gonna get all mushy about this place but the pouch will give y'all the quick and dirty breakdown on the vittles. 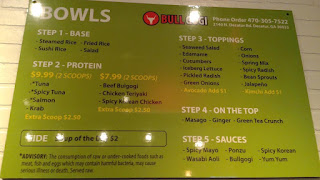 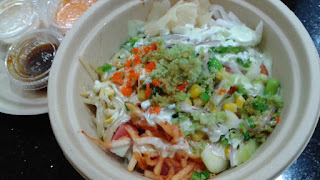 Tuna, Salmon Poke Bowl. I kinda liked that they use these recycled hard ass paper bowls... They're perfect to load a shit of junk in that bowl... Yep, right back to the dick in a box reference, so childish! So, there's sushi rice, a scoop of tuna and salmon cubes, basically all the fucking toppings I can fit in there, wasabi mayo and ponzu, and the green tea tempura. You would think all that shit piled in there would taste like... Well, shit. But it was totally edible. Was it giving me a blood flow in my nether region? ...Fuck no. It ain't a true poke bowl because the sooshee cubes were not seasoned or marinaded beforehand, just plain old fish cubes... But for what it was, all the ingredients were pretty fresh and colorful. 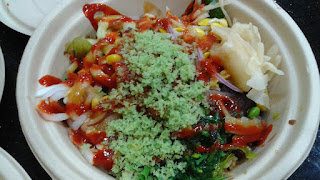 Beef Bulgogi, Spicy Korean Chicken Bowl. It's basically the same deal here with the bulgogi bowl as the poke bowl. You pick two meats and pile as much shit on top as you can. Like the poke bowl, this was totally acceptable as well. The only thing that had a weird taste to it was the green tea tempura, it tasted like old frying oil for some reason.

I can't piss on them too much because it wasn't as bad as I thought it was gonna be... Oh, believe me, I was ready to tear them a new asshole after I was done with mine on the toilet... But it's such a cheesy cartoonish gimmick that you just kinda wanna let them do their thing and see what happens. It's like watching the Special Olympics, you just can't not love those silly bastards running the wrong way and still win a medal. Will I be back anytime soon? Prolly the fuck not but if they expanded the menu to include KFC and other vittles, I may be persuaded by some brown party liquor to pay another visit... Or if they're on Scoutmob or something... You know, just for the shits and giggles factor. Somehow, I think they will end up on Scoutmob sooner than later... The pouch instincts never fails. Well, we all know how that will end if they do. But for the time being... Bring your kids, they will love it because they have no palates. They just like the pretty colors and get a medal for eating their veggies.

Gastronome
Some people need a good cock punching sometimes. But sometimes all you really need is a good fried chicken.