skip to main | skip to sidebar

If Johnny's Hideaway ever had a sister restaurant... This would be it. Wait, they don't own this joint do they? That would be a frightening and intriguing thought. This was like real adventurous eating... Not because of exotic ingredients but because of erotic exchanges between the blue hairs at the bar.
I have passed by this place through the years but never actually gone inside to examine the specimens within. This place is fucking awesome. Kinda like discovering a rubber in your wallet when a hot girl wants to bang you in the toilet unexpectedly... Hell, what am I saying, old people have no fear of dying and they don't need no stinking condoms. They barely have any sensitivity downstairs let alone any consistent blood flow, so they need every nerve ending they can feel to perform the job. Speaking of barebacking it... I guess it's time to sample some of the chum up in this piece. Why am I doing this to myself, again... Oh, yeah, for my one loyal reader! I should get a Purple Heart after this... 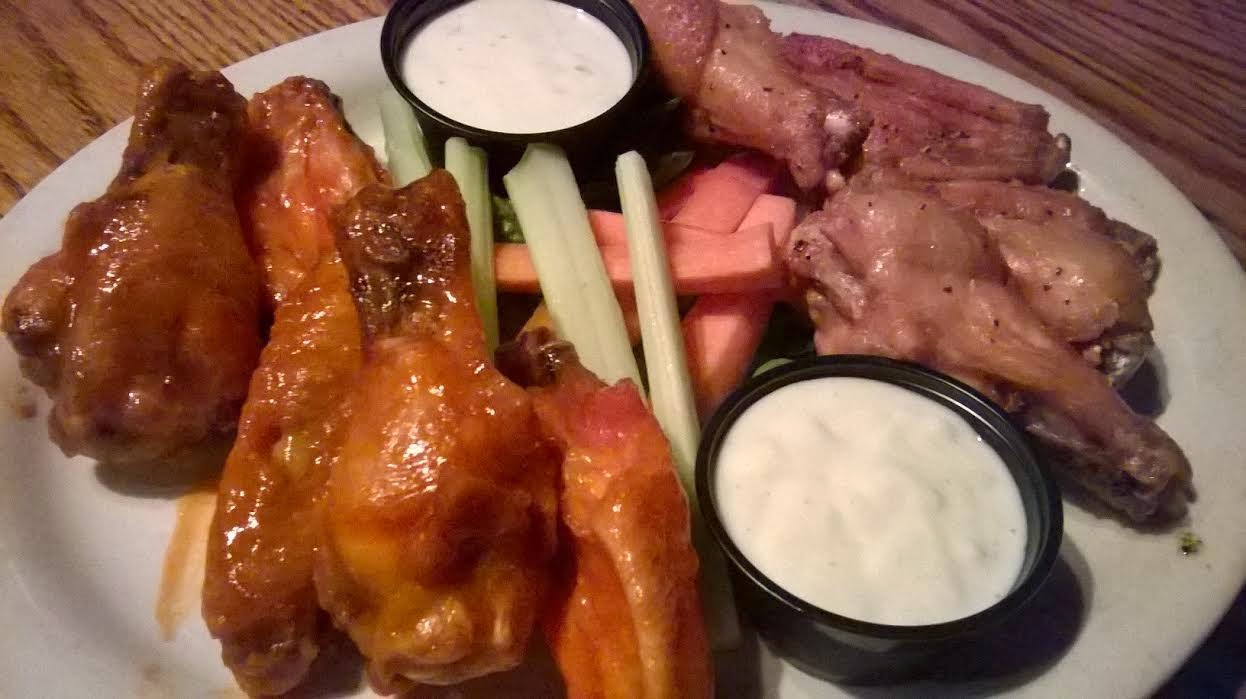 Jumbo Buffalo Wings. Nice that you can split the style of wings to be had. Spicy hot wasn't all that spicy, it was pretty pathetic actually. I think it was carrot puree sauce. The other was lemon pepper, if you wanna call it that. It was like under seasoned dry fried wings with a squirt of lemon from a bottle with a couple flakes of black pepper from the paper packet you get with to-go orders. The wings weren't jumbo but more the standard mid size. It's pretty pedestrian but I ate it all anyways. I'm such a careless fat fuck. 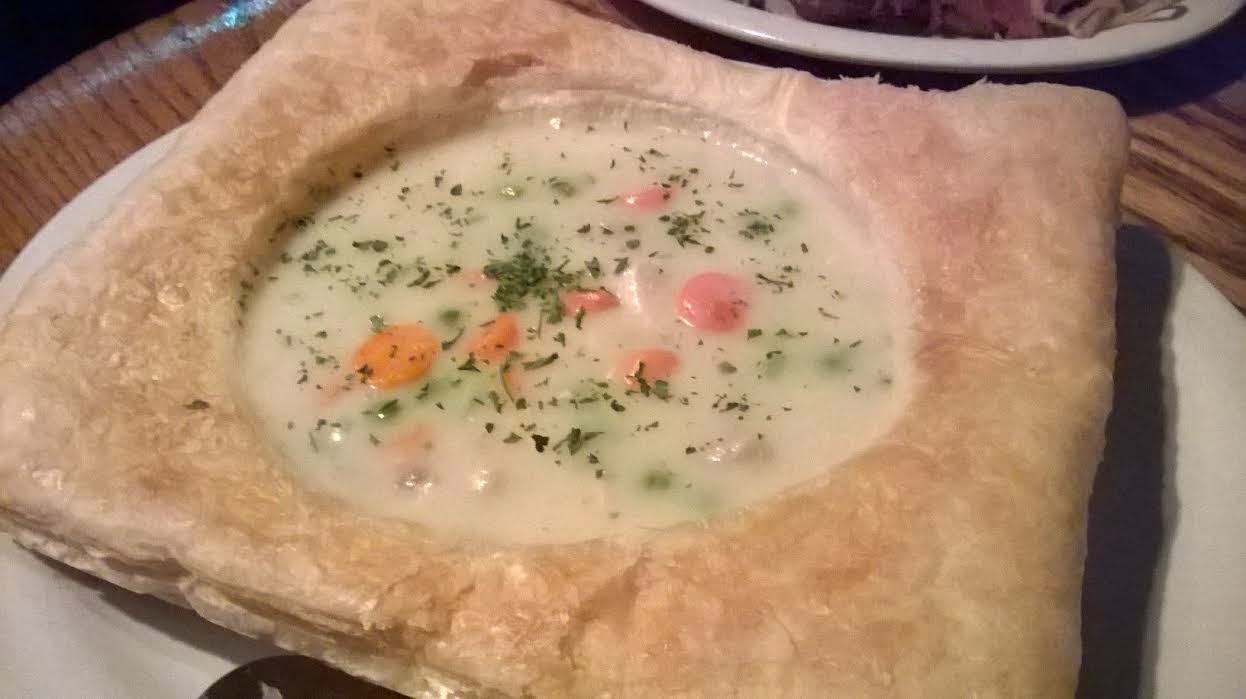 Chicken Pot Pie. OK, when this came out, I was kinda impressed, especially, coming from a place like this. They actually made this puff pastry plate bowl thinger. I know your first thought is, well, Panera has their bread bowl slop... And yes, this is not much different. But it doesn't mean that I didn't liked it... Even though the pot pie filling was salty as shit and pasty and kinda tasted like it was from a can, I was still intrigued by the edible plate bowl presentation. I need to make some edible puff pastry underpants or depends... Now, that would be a whole new meaning of eating out a chick. 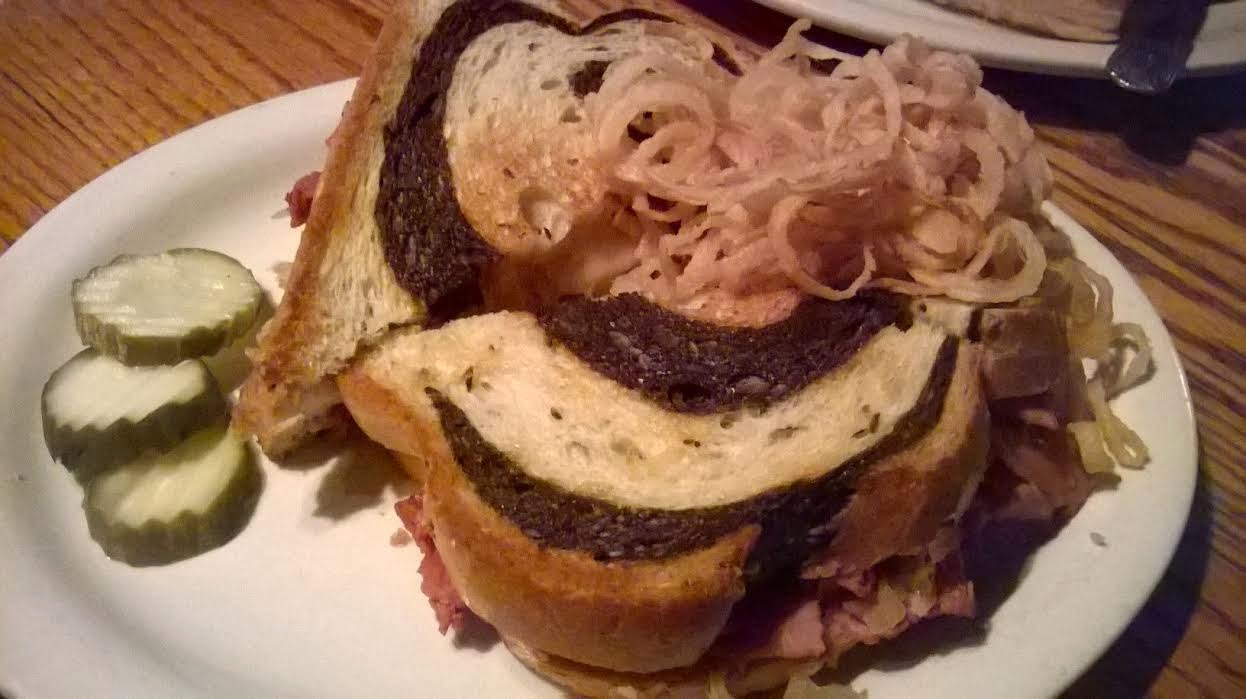 Grilled Reuben on Marbled Rye, golden brown onion strings. Do I dare to even order a New York staple in this dump? Do they even know what corned beef is or marbled rye? I wasn't in the mood for a greasy burger so a greasy reuben it was. It came out looking ok I guess... Took one bite and I was right, not a real reuben, just a mediocre knockoff. I do respect them for subbing out the brown bag fries for some of their onion strings which were nothing special but it woulda been good as a burger topping. I like the effort but this will never happen again.

This place is a trip... A time warp of sorts. The staff is attentive and the menu is very standard pub grub with a couple of visual surprises. Taste is not their main objective here... Their selection of classic and trendy cocktails from the 80's still lives on for the low low price of $7.25. After a couple lemon drops and cosmos, I'll be feeling frisky and in the mood for a cheekan pot pie the size of a naval carrier like the gaggle of haggles at the bar. I can totally score here without cleaning out my stash of blow unlike at those other trendy nightclubs and the hawks that circle around. Well... Maybe. I have been dryer than the sabertooths at the bar. Bartender, another cosmo, pweez... Then I'll go home and cry myself to sleep.

Ever seen a Biffy Bag? BRG always me think I should put one in my purse.

Gastronome
Some people need a good cock punching sometimes. But sometimes all you really need is a good fried chicken.